Though many ghost towns have historical significance, only a few have direct links to Nacogdoches. Since Nacogdoches has a rich history and is known as the “oldest town in Texas,” the ghost towns that helped cement Nacogdoches’ influence in Texas history deserve separate recognition. 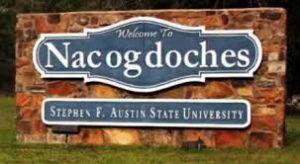 A Spanish community on the Trinity River, Bucareli was made up of Spanish settlers who were driven out of their homes in East Texas and forced to go to San Antonio. Unhappy with their relocation, the settlers begged Viceroy Antonio María de Bucareli to grant them permission to move back to East Texas. Sympathetic to the settlers, Bucareli finally decided on a plot of land along the Trinity River in Madison County. The settlers chose to name the community Nuestra Señora del Pilar de Bucareli after the Viceroy, and the settlement was officially established in 1774 where the Old San Antonio Road crossed the Trinity River. The community soon had a guardhouse, plaza, hewn wood houses, multiple huts, and was even granted exemption from civil taxation with the French because of a renewed trade agreement. However, a combination of a 1777 epidemic and a string of Comanche Indian raids in 1778 meant trouble for the settlers. Led by Antonio Gil Ibarvo, residents fled without official permission. Where did they flee, exactly? Well, further north in East Texas, establishing in April 1779 what went on to become the city of Nacogdoches.

Along with many other small communities in East Texas, Dextra, located south of Sacul at the FM 1648 and County Road 898 intersection, was established before 1900 as a small farming community. Though not much is known about Dextra, historians know that there were a few houses, a school, and a church that served the community for the first half of the twentieth century. However, much like it did to other small towns in the region, World War II brought economic trouble, and the majority of Dextra’s residents moved away before the war’s end. By the 1990s only a couple of houses and buildings remained along with a plaque at the Hopewell Mount Zion Baptist Church. The plaque is still there to this day and it tells of the church’s original founding in 1898 and how it was rebuilt to accommodate the growing community in 1957. The plaque serves as the only reminder of the little farming community that once was.

On December 31, 1830, a contractor was commissioned to build some scattered businesses and a schoolhouse off of current State Highway 36, twelve miles south of Angleton in what was referred to as Gulph Prairie. Three families, the Bryans, the Perrys, and the Austins, settled the community, along with Henry William Munson, James Peckham Caldwell, and the McNeel brothers. In the early 1840s, Protestant church services were held in a log cabin and a post office serviced the town, though it was shut down in 1866 after the Civil War. By 1906, the local schoolhouse had forty-one students and one teacher, and the town had a Baptist church that had grown significantly in its decade-long existence. The community consisted of a few scattered buildings and businesses through the twentieth century, but by 1974 only a church and cemetery remained near State Highway 36. Though the town no longer exists, the cemetery has lived on in fame because the site was used as early as 1829 by relatives of James Franklin Perry and other members of the Peach Point Plantation, the original settlement of the region. This settlement is also one of the first resting places of Stephen F. Austin on his 1836 journey.

Mount Sterling was a riverport town of many names, including Aldridge’s, Goodman’s Crossing, and Mount Huling along the Angelina River, just south of the State Highway 21 bridge in Nacogdoches County. Initially established in 1837 by John M. Durst near what used to be the Nuestra Señora de la Purísima Concepción de María Mission, Mount Sterling began as a small town with only a sawmill and a storehouse. The following year, Durst built a toll bridge over the Angelina River, linking two sections of El Camino Real with Mount Sterling. That same year, Durst purchased supplies to support early settlers of the town to encourage population growth. A post office was granted in 1837 and remained functional until 1840, but Native American raids and conflict caused trouble for the community. Due to the danger surrounding the town, Durst fled in 1840 and moved to Leon County, and the rest of the settlement soon dispersed as well. Some settlers reportedly moved to the region that was known as Nacogdoches.