Part of the journey of East Texas ghost towns is finding some of the wacky backstories that surround them. Most of the stories are not outlandish, but they are unique enough to fit into their own category. From malaria-ridden mosquitoes to coffee beans, these towns unearth a less-explored facet of Texas history.

Burning Bush straddled the border between Cherokee and Smith Counties in the early 1900s as a sector of the Metropolitan Church Association originally from Waukesha, Wisconsin. The East Texas branch of the Burning Bush colony was established in 1912 occupying the old Douglas house in Bullard, and 375 church members arrived within the next year. Soon after they arrived, the members of the church constructed a wooden tabernacle, which served as the hub for colony life, as well as dorms for single men and women. When the settlers moved to Burning Bush, they all agreed to give up their worldly possessions to live communally, they barely interacted with outside communities, drinking and smoking was illegal, and those who rebelled against the church were not punished, but taken to the tabernacle and prayed over amid a sea of wails from the colonists. Interestingly, visitors were not only welcome, but encouraged. Most of the money earned by the colony was made from selling nuts and fruit produced on the farmland and funding from the Metropolitan Church Association. However, a sudden lack of funding and a couple of lawsuits against the church caused trouble for Burning Bush. In April of 1919, the sheriff seized the land and the buildings were sold at an auction in Tyler. After all of the residents fled, the community was officially dispersed, leaving only a few scattered buildings.

Located just west of Lake O’ the Pines in northeastern Upshur County, Coffeeville was established in the mid-1800s. The origin of the town’s name is widely speculated. One rumor is that a traveller spilled green coffee beans on 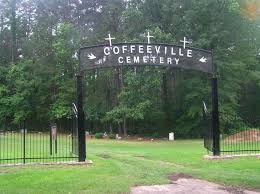 an adventure and the beans sprouted by accident. Another speculation is that Coffeeville was a campsite and the smell of brewing coffee gave the community its name. However, the true story is that the Coffee family, who originally settled the region, named the community after them. Coffeeville is one of the earliest settlements in Texas, serving as a riverport town and supply, repair, and recreation spot for travellers headed west. In 1852, Coffeeville welcomed a post office, Methodist and Presbyterian churches, a few doctors, grocery stores, dry-goods stores, a Masonic lodge, an academy, a hotel, and a drugstore. The successful settlement was home to saloons, a pool hall, blacksmith shops, and was one of the first Texas towns with a bowling alley. In 1867, Coffeeville opened one of four high schools in the entire county, though enrollment was only seventy students. Despite minor financial troubles, the Civil War did not destroy the town, as a training camp for Confederate soldiers was built near the war’s end. However, railroad expansion after the Civil War forced Coffeeville to be bypassed, hurting the population. Though there were still about fifty people recorded in the settlement as late as 2000, Coffeeville itself had faded into history.

Java has its own unique story of how it got its name – it was named after a petticoat made out of a coffee sack that was lost at a dance, and the settlers joked that Java was the perfect name for the town. Located just south of the intersection of Tails Creek and One Arm Creek, what would become the Cherokee County settlement was founded by immigrants from Alabama and Tennessee in the late 1840s and early 1850s. The town was not very large until the 1890s due to an influx of unusual townspeople – prisoners. The Texas State Penitentiary in Rusk sent crews of prisoners to mine coal to fuel the furnace at the prison. This caused people to take notice of Java and enough people moved to the area that, by 1895, the town opened a post office. In 1906, the Texas State Railroad that ran from Rusk to Palestine caused Java to be forgotten, closing the post office and many of the small businesses. Most of the residents moved to nearby Maydelle and Java was effectively a ghost town by 1910.

One of the earliest known settlements in Gregg County, Camden rested near the Sabine River crossing called Walling’s Ferry, and the two names became synonymous for the community. The Mexican government was doing business with the town already in 1832 when Sam Houston came to Texas, and in the mid-1840s an eight-room, two-story tavern with sleeping quarters was constructed for the community. Around the same time, the town had a post office, and operated as a successful steamboat port. There was one issue with this community, though – the river bottom was infested with bacteria, parasites, and mosquitoes. Before the Civil War ended, the town became overwhelmed with malaria-ridden mosquitoes that wiped out much of the population and caused the other portion to relocate. By the 1870s, the town was officially abandoned. There are still some remnants of Camden in the form of a cemetery (which was in operation for the surrounding areas until the 1990s) and a few abandoned buildings.

Asymmetry of Caddo Ceramics from the Washington Square Mound Site: An Exploratory Analysis