An Interview with Attica Locke

Attica Locke hails from East Texas and writes about the African American experience in her work. Most of Locke’s work falls into the genres of detective and legal dramas, with a little southern flare that has made her a renowned chronicler of East Texas. Her novels have only gained in popularity throughout her career, as Black Water Rising (2009), The Cutting Season (2012), Pleasantville (2015), Bluebird, Bluebird (2017) and Heaven, My Home (2019) have taken the literary world by storm. Her novel Pleasantville won the Harper Lee Prize for Legal Fiction, The Cutting Season was awarded the Ernest Gaines Award for Literary Excellence, and her other novels have been nominated for other prestigious awards, including the Edgar Award. As if her literary reputation was not enough, Locke is also an active screenwriter in Hollywood, with the hit show Empire (2015 – ) under her belt. I was fortunate to be able to conduct a phone interview with Locke, during which we discussed her career, her family, and her deep connection to East Texas.

Why did you start writing?

I’ve always been a writer, even though I didn’t know to call myself that. Even as a kid, I wrote stories. I physically remember choosing to do that over other things in the summer. I was the kid who was locked up in my bedroom using my dad’s typewriter to write stories more than going out to the pool. I kind of came about it in a roundabout way because, though I always did it, I never thought to call myself a writer. I was always interested in movies. I actually went to college to become a movie director. Through that process, I began to really realize that, when you write your own material, you have a better shot of being able to make something. I never made anything as a director, but I found I could write professionally, so I became a screenwriter for hire. None of the movies ever got made. It felt kind of empty, so I made a decision in about 2005 to walk away from Hollywood. I gave myself a year to write a book, and I did. It’s not as easy as I thought it would be to switch gears, but writing books gave me a way to write my voice that, at the time, screenwriting couldn’t give me. Eventually, I found my way back to screenwriting with Empire.

What is your relationship to East Texas? Do you have a specific fondness to the region?

I like to say that I actually became a writer on Highway 59. My whole family comes from tiny towns on Highway 59, from Cold Spring, to Lufkin, to Corrigan. I spent a lot of time when I was younger riding up and down 59 to visit relatives. I would look out the window, looking at the creeks and the piney woods, someone running a hair salon out of the back of a trailer, and an icehouse with bikers outside looking like a biker bar and my imagination would just go crazy as a child. I’ve said before that, without realizing it, the imprint of me being a storyteller happened on Highway 59 on long car rides going to see family, having nothing else to do but daydream and make up stories. 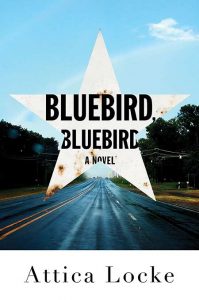 In your novel Bluebird, Bluebird, your main character, Darren Mathews, is an African American Texas Ranger in East Texas. What inspired you to choose this storyline?

That novel is part of a series of books that take place on Highway 59. During the Great Migration after the Civil War and throughout the twentieth century, blacks were fleeing the South and Jim Crow and landing in New York, Chicago, Indiana, and West to California. I come from black Texans who stayed. Other than a couple of cousins here and there, my family never left. So part of Darren’s family is the history of my family. Part of my reason for writing this was me trying to wrestle my profound love for Texas against the reality of living in the state and how you love the state that does things that break your heart. It has a history of racial animus and currently laws are passed that I don’t agree with, yet I am proud to be from Texas. I was trying to wrestle with my love for the state and to understand why my family would have stayed. I have an appreciation for them making a decision to say “why would I leave a state that I helped build? I would rather stick around and see if I can’t make it better.” A lot of the specific information about the Aryan Brotherhood came from me researching what Rangers actually do, and there actually has been a big task force with the DEA, ATF and FBI about taking down the Aryan Brotherhood, and that became a jumping off point for me for the story. I think when people think about Texans, they don’t always realize the breadth of black Texans and what that means. My dad wears cowboy boots every day of his life, I have an uncle that’s a cattle rancher. I’ve started wearing cowboy boots every day and I’m really proud of the culture because I grew up in the culture. I wrote this book series as a kind of a love letter to black Texans.

I notice you were previously a writer on the show Empire. How was that experience different from writing novels?

The thing about being a novelist is that there is nothing more fulfilling than making up a story all on your own and publishing a book. It is a soul-fulfilling exercise. On the other hand, there is nothing more fun than writing a TV show. It’s a ton of fun, and the reason is that you’re not all by yourself. There’s a lot of mind-melding because you sit around for hours and hours a day and talk about stories and come up with a story together. You kind of make each other better in that way. One writer will actually go out and write the outline and the script, but a lot of the heavy lifting is done in the writers’ room. If you get a good team together, it can be a lot of fun. I’ve made what I believe to be lifelong friendships for working in that kind of environment in a collaborative part of television, which is part of what makes it fun and exciting, in a way. It’s not just the writing that happens in the writing room. The truth of the matter is, when you work on a set and make decisions with the set designer and costume director, you’re making decisions that tell parts of the story. The very thing about television that makes it great is the collaboration, and the very thing about being a novelist that makes it great is the solitude. Sometimes it’s great to collaborate, but sometimes it’s nice to wrestle and grapple with my own thoughts and create my own story.

Do you have any advice for aspiring authors?

For people who are interested in writing books, I would say read, read, read constantly, and keep writing as much as you can. And for college students, look for places where you can find a pocket or elective that allows you to express and hone that craft. Getting an agent and editor doesn’t matter until you get your craft where it needs to be, and the way it gets to where it needs to be is to read a lot and write a lot. For screenwriters, some of that is the same – keep writing scripts, keep studying scripts, and also look for where you can take classes to keep getting stronger at the craft. Your career will never jump off until you have the script that so specifically ups your voice in an interesting, fresh, and really strong way. There is an incredible program at UCLA that has an extension of excellent online writing classes. This goes for people who want to be a book writer or a screenwriter. They have classes for both taught by professionals in the industry. They are exceptional and you can do them online.

Locke proved to be a wonderful conversationalist with a warm personality akin to that of an old friend. More of her achievements and other biographical information can be found on her website, atticalocke.com.