Back to Projects
View Project

This is an ongoing project. If you have photographs or other information about a historic property in Nacogdoches you’d like to share, please contact us! We’d love to add it to the site.

The City of Nacogdoches Historic Survey is an opportunity for the local government, home owners, and researchers to access up-to-date information about the historic structures of Nacogdoches. In 1986 the city hired a historical consulting firm, Victor and Victor, to survey structures in and around downtown. The result of survey was a three-volume work containing descriptions of just over 600 properties’ physical condition including architectural and historical significance. Based on that survey, the City of Nacogdoches established five historic overlay zoning districts and a list of individual properties whose structures are subject to review by the Nacogdoches Historic Landmarks Preservation Committee whenever exterior work is being considered. Between 1986 and 1992 the city hired several consulting firms to research, write, and submit over ten National Register of Historic Places individual and district nominations based on the findings of the Victor & Victor 1986 survey. Although the NR listings are similar to the zoning districts, they are not exact duplications and the NR properties are subject to NHLPC review only if they are in a zoning district, not because they have been listed on the Register. When the city submitted its most recent nomination, the Downtown NR Historic District in 2007, it became quite apparent that the 1986 survey information was outdated. In addition, the city staff needed a better way to maintain and update the information about each structure’s condition and alterations.

In the summer of 2010, Brian Bray, the city historic sites manager, and Perky Beisel and Paul Sandul, public historians in the Department of History at SFASU, outlined a plan to resurvey the properties included in the Victor & Victor survey as well as establish an online database for use by the city, property owners, and the public. The group decided to begin with the properties within the five historic zoning districts (Washington Square, Downtown, Virginia Avenue, Zion Hill, and Sterne-Hoya) and the individual properties zoned historic yet outside a district. In the fall of 2010 students in Dr. Beisel’s American Architecture class resurveyed the Downtown district and helped develop a procedure for the larger project. Funding for their supplies came from an Office of Student Affairs Service Learning Grant. In the spring of 2011 the City applied for and was awarded a Certified Local Government grant from the Texas Historical Commission to purchase two Trimble Yuma units for the re-surveying project. In the future, the city staff will be able to access the database and update each structure’s condition while in the field as well as take reference photographs and record GPS locations using the units. The Center for Regional Heritage Research, SFASU, agreed to host the online website for the city and beginning in Spring 2011 provided student workers to upload the previous survey and National Register information as well as the work conducted in Fall 2010. The final section of Phase I, updating all properties in the 1986 Victor & Victor survey zoned historic, was finished in Summer 2012. The collaboration between the City of Nacogdoches, the Center for Regional Heritage Research, and the Public History graduate program in the Department of History at SFASU is providing an excellent opportunity for SFASU students while enabling the local government and the public to manage and promote the historic resources of Nacogdoches.

Information about the historical significance of the City of Nacogdoches can be found in the 1990 NRHP Multiple Property Documentation Form: Historic and Architectural Resources of Nacogdoches, Texas. 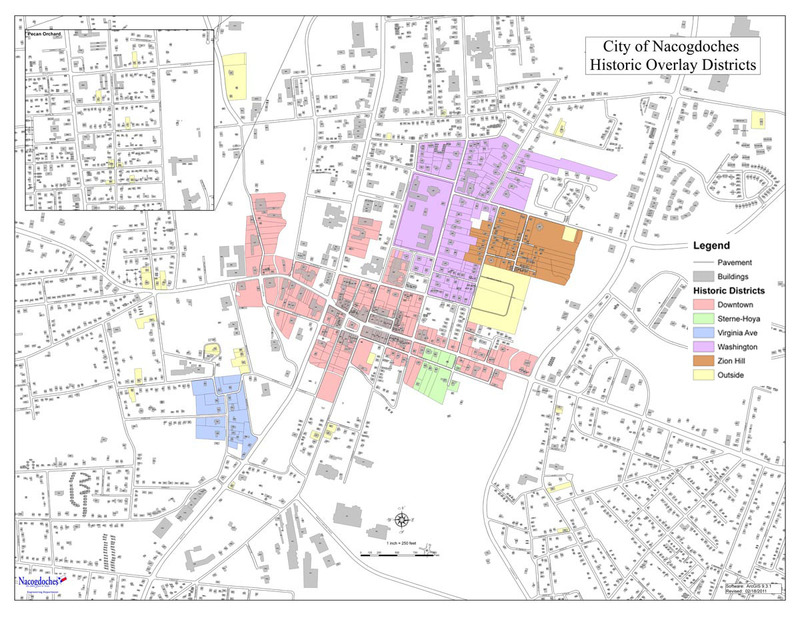